This week I’ve tried to spend as much time as I can on the weighted blanket but it hasn’t been easy. I’m still dealing with the pressure in my head which makes bending over painful. Thankfully I only had to bend over while I marked the blanket for the columns that I needed to use to fill with beads and then the subsequent row markings.

I chose to mark the back side because it is white and easier to see the markings. I will admit I was getting frustrated with the marking pencil I had. The tip kept breaking off so I’d have to stop to sharpen it again. When I bought it I didn’t think it would matter if I had a particular brand so I just bought the first one I found, but now I’m learning I should ask opinions for everything, even something as seemingly insignificant as a pencil.

So, do you have a particular brand or type of pencil that you like to use? I can’t continue using this blue one, I’ll pull my hair out. Plus, I’ve sharpened over half of it away already.

I wanted to make sure the pockets of beads were all the same size. I decided on four inch squares. That meant I had to have twelve columns and then I’d have fifteen rows. 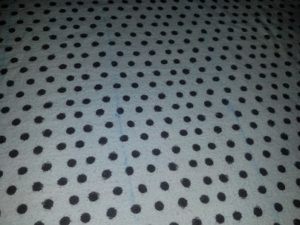 The markings are light, but it was easy enough to see to sew on. I used my Ideal Seam Guide again so I was able to keep the lines straight even though I was sewing such a large piece of material.

Once the columns were finished I started fill them with beads. The goal is to have the blanket weigh six pounds. That worked out to each pocket containing half of an ounce.

I almost made a huge mistake on the first row. I accidentally divided the amount of rows by the weight so I thought I needed two and a half ounces per pocket. Thankfully, I had only filled six of the twelve columns before I realized what I had done. I had to empty out each column and start again, but at least I hadn’t sewn the pockets closed yet.

So far, I’ve only finished four rows. It is incredibly time consuming because the beads like to stick to the flannel so getting them to fall down to the bottom of the column takes patience. I hadn’t thought of that potential problem when I picked flannel. I imagine it will go faster the closer to the ‘top’ I get.

How do you know which material is best? I know cotton makes the best quilts, but you can’t stick with only cotton all the time, can you? 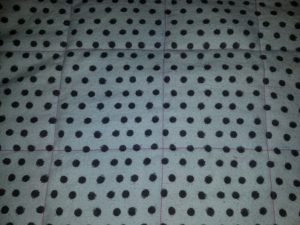 On a positive note, the pink thread I picked really pops against the white and black which I love. It blends in to the pink plaid on the other side a little more than I had anticipated it would. That’s not a bad thing, I just thought it would be a little more apparent than it is. I didn’t think to snap a picture of the front to show what I’m talking about. I’ll definitely have a picture when the blanket is finished. I have to finish it next week. We are in the final stretch before Christmas and I have a deadline. I should get back to sewing. 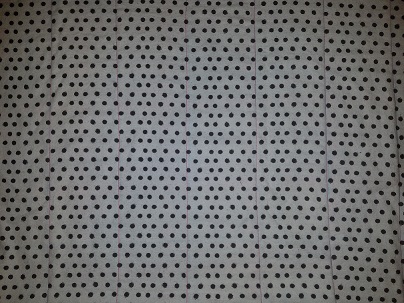