It’s a new week and I’ve made more progress with my second mini quilt. I was able to practice my half triangles with a larger square of fabric, which was fun. 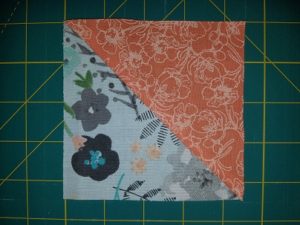 These squares are twice the size of the previous ones I’ve been working with. I definitely think working with larger squares is easier than working with smaller ones. That is the downside to working on such a small project. I’m looking forward to upgrading to a larger project once I’m done with this.

The next step was to start to assemble the five different rows that make up the center of the quilt.

Normally I would sew two pieces together and then press immediately before moving on to the second piece. This time, however, I decided to sit and sew each pair together and then press them all at the same time. It helped me keep them divided into their two separate groups (they angled in two separate directions) and I feel like it was faster than stopping after completing each one. Plus, I used my Ideal Seam Guide again so I was able to achieve the perfect 1/4″ seam quickly and efficiently. 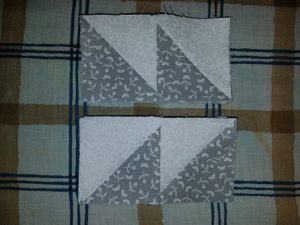 There are only two squares joined together, but I can tell they are going to line up so much better than the other quilt did.

Because I was dealing with two different groups of grey and white squares I decided to lay out the quilt so I could keep track of where each group went. I’m a visual person so it helped to be able to just grab each new piece and sew it together without overthinking about what needed to go next.

There were five rows when I was done, but I only snapped a picture of one of them.

I’d just like to point out the points on the grey section in the middle of the row. They are perfect! I’m feeling much more confident this week as I’m building up to assembling these five rows together. I have high hopes that this quilt will show the improvements that I’m hoping for. 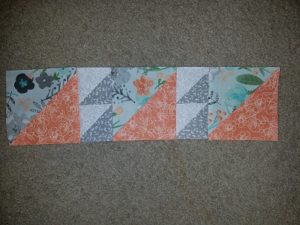 This week I’m hoping I can get some tips on keeping your pieces organized. I only had two groups to keep track of and I was so worried I’d get them mixed up I laid them all out. Then, because I didn’t want those to get messed up I was forced to make sure I sewed them all together before I could finish for the day. What happens when I have a more complicated pattern? How will I keep them straight? What are some of your tips and tricks to staying organized while you sew? 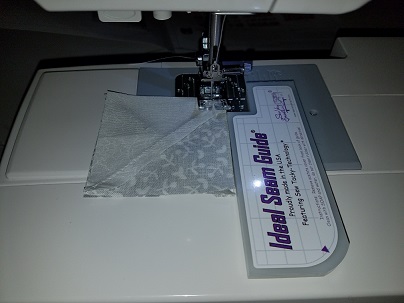