I’m so excited! My first two blocks came for my block of the month club! Most months I’ll just receive one block, but there will be a few with two and I kind of love that the first month is a double block month. Look at these fabrics! Aren’t they beautiful?!

I just now realize that I didn’t include the piece of white fabric I also received. Oops.

Anyway, these are hand dyed fabrics and they feel amazing. The end result will be fantastic. I was a little nervous about the possibility of bleeding, especially since these are shades of red. Thankfully Cristy Fincher, who owns Purple Daisies Quilting and who is running the block of the month club, is willing to answer any questions one might have, no matter how silly it may be.

I emailed Cristy and asked her about the possibility of bleeding and if there was anything I could do to help prevent that. She responded faster than I expected, which was nice, and she assured me that they had been thoroughly washed and shouldn’t bleed. However, if I wanted peace of mind about it I could get a corner of the fabric wet and then press it with a hot iron on top of a light colored towel. If it was going to bleed, the color would get on the towel.

I will admit I wanted the peace of mind so I did test three of the six shades of red. Once I got the third done I felt pretty confident the others wouldn’t bleed either. 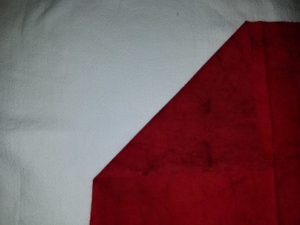 Look, not a trace of color on that white towel!

I spent some time this week watching the tutorials that are available to those participating. They’re long, but worth taking the time to watch, especially if you’re a beginner like me.

We will be doing half square triangles using a method that I’ve never done, so I appreciated the help with cutting the pieces out. I have a feeling I’m going to like this method, but I won’t know until I start sewing.

Before I started cutting this time, I made sure to starch my fabric when I pressed them. I hadn’t done that before but it really made a difference. My Aunt LuAnn told me to make sure I starch and I’ll never not starch again.

The tutorial also went over a new cutting technique that I had never tried, but it makes cutting so much easier. It seems obvious now, but if you cut with the ruler on the left of the fabric and have the ruler cover the portion that you want to cut off, you have a more secure cut. 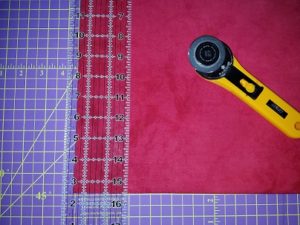 It also helps to have a grippy ruler that won’t slide around. I had already purchased my ruler and didn’t want to go to the store to get another, more expensive one. So instead I took some So Tacky Technology, the same technology used on the Ideal Seam Guide, and placed small strips of it at three different points on my ruler. Now, my ruler grips the fabric the same way the Ideal Seam Guide grips the sewing machine. You just buy replacement strips for the seam guide and use them on your other tools. So helpful and easy.

With the tutorials and getting all the cutting done, I didn’t have time for anything else, but the cutting went faster than it ever has before. Just last week I mentioned that prepping is my least favorite part, but now that I know these tricks I don’t think I’ll be dreading it any more.

Do you have any tips and tricks up your sleeve to help with the preparation process?

I’m so excited to start sewing this block! 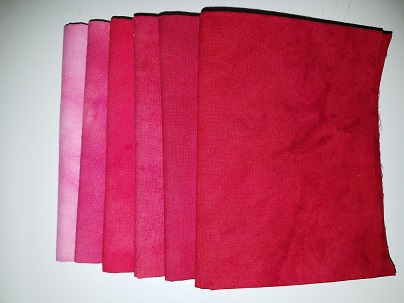 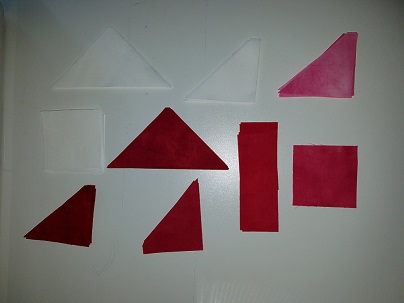