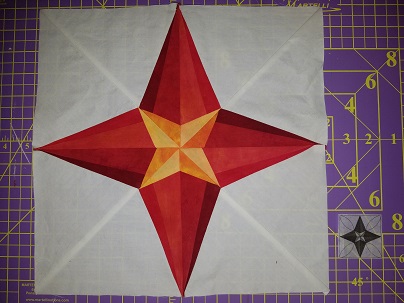 This week has been a roller coaster of emotions for me. On one hand I was so excited to finish the first part of May’s BOM and to have it look beautiful. The center turned out perfectly with it’s points and the colors are fantastic. It took me a few days to complete this center portion and it was worth all of that effort. Or so I thought.

When I started to square it up I realized a rather unfortunate problem. The ends of each star come to a point right to the edge of the square which means I have absolutely no seam allowance.

I was really disappointed by this, but honestly I wasn’t too discouraged. I covered a 1/4″ of each tip to see how badly it would look with the ends blunted instead of coming to a point and I can say I didn’t think it looked bad. I was willing to ignore the the blunted edges and move on with the next step involving applique, but then another glaring issue came up.

These points created from four different fabrics coming together means there is a lot of bulk. There were many pep talks trying 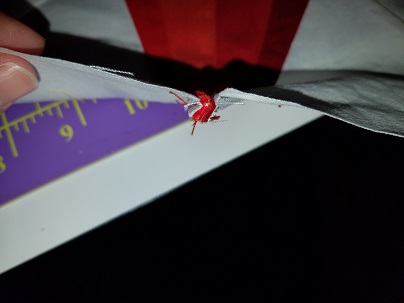 to convince myself that it would be okay. But I knew better. I can’t sew into the quilt. It would cause way too many issues.

Now here comes the kicker. This particular block required paper/foundation piecing to achieve the design. Last month I used foundation and loved it, but I only ordered a yard of it and it wasn’t enough for last month AND this month. I could either order more and wait until it got here or I could try to paper piece it. I had appropriate paper on hand so I’d be able to get started right then so I went the paper route.

Unfortunately, I had already torn the paper out of the block when I realized the problem I was having. I knew redoing the block would be a challenge without the paper, but I was willing to at least try. It took some patience but I was able to remove one fourth and dissect it down to an eighth section. Once it was separated and I tried to glue baste the pieces together I knew I wasn’t going to be able to get them back together without another paper template to guide me. If I was an advanced quilter I might be able to do it, but with only ten months of experience under my belt I knew it was out of my league. 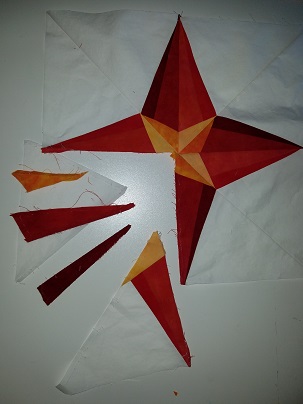 Another issue is that by now the pieces have been trimmed down so there is no room for error, which I need. So…with reluctance I’ve decided that I have to start over, from scratch, using all new material. I’m not happy about this, especially  since there’s a chance I could redo them and still have the exact same problem I had the first time.

I do think I’ve realized part of the problem. I had back stitched each seam that came to those points which added to the bulk. When I redo them I will make sure not to back stitch and see if that makes a difference. I also know better what to look for as I join each quadrant together. I spent so much time lining up the center, which turned out great, that I kind of neglected the ends. That was a mistake with this particular pattern.

I’m scared to try again. I don’t want to fail for a second time. I will probably cry if that happens. My mom thinks I’m a perfectionist and I know that’s part of it, but I also know that I can’t have all of that bulk if I’m going to piece it to more finished blocks. I know I’m right, I just wish there was another way.

Has anyone else ever had to completely redo a project or part of a project? How did you deal with it? Were you paralyzed about moving forward or did you just grin and bear it?

I’m hoping it pays off for me, otherwise I’m afraid I will be paralyzed about moving forward with future blocks. 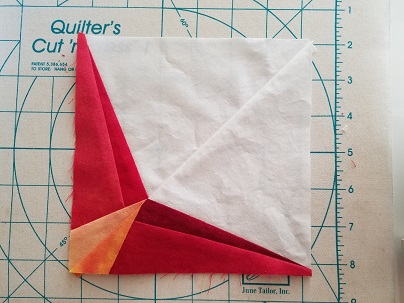 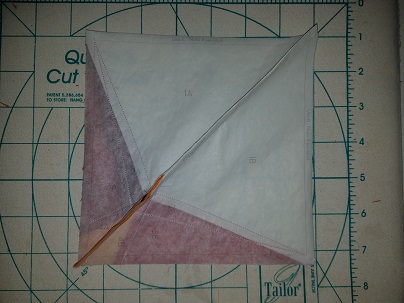