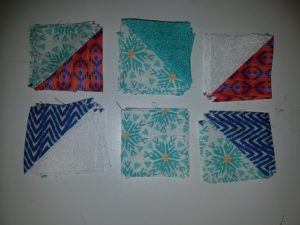 When I left off last week I still had a ton of squares to sew together but I was able to finish sewing them over the weekend. The picture doesn’t do justice to each little stack.

This week I’ve been focusing on sewing them into the four main blocks of the quilt. The first step was sewing four of these little squares into one larger square. I ended up with two different block patterns.

The red and green had fewer seams in the back due to the solid green square that was used, but pressing as I went kept them both from being bulky in the back. 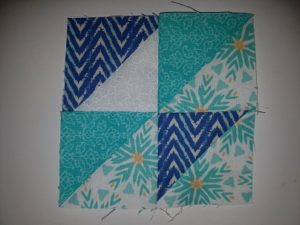 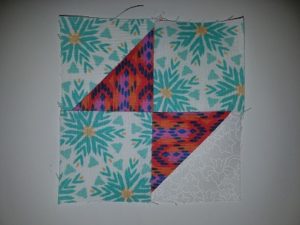 Once those squares were complete I combined four more into an even larger block so I ended up with four large blocks in all. I know this is my first project so I can’t expect it to be perfect, but there was definitely some trial and error on my part.

The first large block I put together wasn’t lined up properly. I had pinned it together like the instructions said, but I felt like it gathered it too much. I think I pinned it wrong. Any advice on the best way to pin two pieces together? Do the pins need to run horizontally or vertically? I had them running vertically next to the presser foot. Should I have done them horizontally instead? Or maybe it was just gathered when I pinned it so I accidentally held the gathering in place. I’m not sure.

This is what I ended up with. 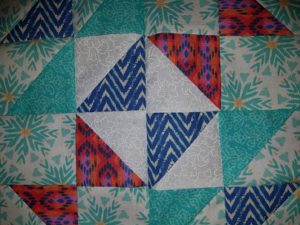 I hadn’t pressed it yet because I was really bothered by how not centered it was. I will admit I did spend the time with my seam ripper to undo it all and try again. The second go was better. I didn’t pin it the second time, which helped. I definitely think I’m pinning wrong.

Here is the square the second time around. 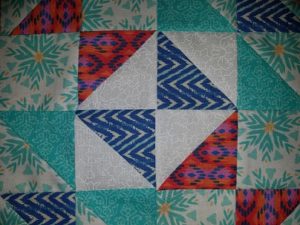 It still isn’t perfectly aligned, but I blame that on the fact that I forgot to square up the smaller squares before I sewed them together. That wasn’t listed in the instructions, but I know it would have helped.

Of the four larger squares I did, three have more noticeable errors than one of them. I know those people who aren’t familiar with quilting will look at them and think they look great, but anyone who knows what it’s all about will see the errors. Still, for a first run I’m pretty proud.

I wanted to show the one square that had the least amount of issues. 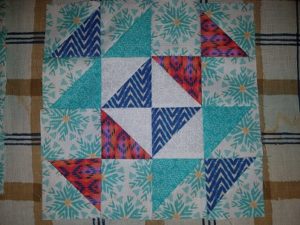 It still needs to be squared up a bit, but otherwise I’m pretty pleased. And I will be squaring them up before I put them all together.

This week I also experienced my first empty bobbin. I will admit I had not taken the time to fill extra bobbins. I didn’t think it would be a big deal to wind them as needed, but I did not realize that I would have to un-thread my sewing machine in order to use the thread I needed in the bobbin function. Oops.

On the bright side, I now know that I am able to wind a bobbin AND thread the machine without looking it up in the manual. I was pleasantly surprised by that, but after feeling a bit like a failure with the pinning I needed the win.