I Made A Mistake

Everything was going smoothly this week. I had my sewing templates printed on the perfect paper, my fabric pieces were cut out without wasting any fabric, and each piece was lining up perfectly once I pressed them. But then I saw a pretty big problem glaring at me.

One of the edges of my triangle wasn’t lining up with the paper. It was almost exactly a 1/4″ off…which was my entire seam 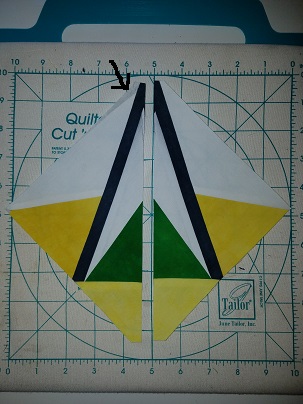 allowance! I thought there was a chance I could salvage it since it was at an angle and only hit 1/4″ right at the corner of the triangle…I could just absorb it in the seam when I attached it to the other triangle. But then I realized I had an even bigger problem…I accidentally did the triangle backwards. It is supposed to look exactly like the one on the right.

Now it made perfect sense why it wasn’t lining up the way it was supposed to. I somehow managed to start sewing on the right side and not the wrong side. lol I don’t even know if that makes any sense unless you’ve paper pieced, but basically you pin or glue baste the fabric to the back of the template and then sew on the front side of the template following the lines that are printed there. This wouldn’t have been a problem if I had been foundation piecing it because I would have only been able to see the pattern on the right side of the triangle, but because I used paper it is see through so I could see the pattern on both sides. I wasn’t paying close enough attention otherwise I would have realized the letters and numbers were backwards when I was sewing them.

In a way it was a blessing in disguise because I didn’t have to sit and wonder if the issue with the alignment was going to be a bigger problem than I anticipated. I was forced to start over from scratch. 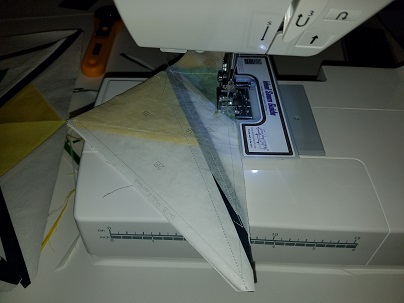 The good news was I only had to redo the one triangle. I did eight total, so only screwing up one wasn’t as bad as it could have been. I am curious though, has anyone else made the same kind of mistake I did? I’ve learned from it so I’ll be extra careful moving forward and make sure I’m sewing on the correct side, but I’m sure this won’t be the last time I do something like this.

Thankfully that was the only hiccup and the rest of the block went beautifully. A big part of that was my use of the Ideal Seam Guide. I know I say that a lot, but it really does make a huge difference. If I had just followed the marker for the seam I would have been just over 1/4″ rather than just under creating a scant 1/4″. The finished block was just barely the correct size and if I hadn’t used the Ideal Seam Guide to get me that scant 1/4″ it would have been too small when it was all said and done. 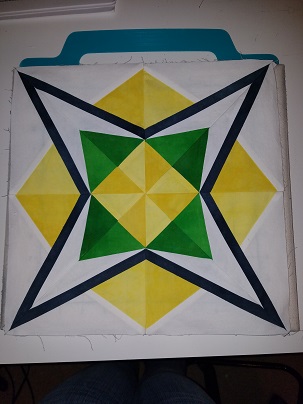 I think this might be my favorite block yet. I love the shapes and the three dimensional feel that is created with the different tones of yellow and green. This is definitely one I would entertain the idea of doing a whole quilt out of.

I keep getting inspired for more and more projects and there just doesn’t seem to be enough time in the day to work on them all, but I’ll keep plugging along and hope that one day I manage to create everything swimming around in my head.