I’ve had some unexpected issues this week that have made my progress slow going. Actually, I shouldn’t say they were completely unexpected, I knew that they happen sometimes, I had just never experienced it myself before.

I’ll get into that but first I want to show off the BOM block I finished last week but couldn’t show off due to technical difficulties.

Isn’t she a beaut? I love the different shades of purple and the symmetry that it has. I don’t know if it’s my favorite of the BOM blocks, but it’s in the top five.

Something else I want to show off is the completed quilt top for my Christmas gift project. If you read my post last week you’ll know I wasn’t sure how I felt about the colors, but I had limited options available to me. Now that the quilt top is assembled I can say I am very happy with the colors. It has an antique feel to it which I know my mother-in-law will love.

The challenging thing this week came with sandwiching the batting with the backing and top quilt. I started in the middle and worked my way out to the edges of the quilt to help make it as smooth as possible but I’m still having issues with puckering, the unexpected issue I referred to earlier. I honestly didn’t even realize it was puckering until I was quilting near the middle of the quilt. I could feel that it wasn’t laying smoothly and my attempts to straighten it out weren’t working. Once I finished that line I turned the quilt over and discovered multiple areas of puckering on the back, much to my dismay.

I didn’t think to get a picture of the puckers before I spent time picking out stitches in an attempt to flatten it out. It’s so frustrating. You smooth one section just to have it pucker in another. I’m hoping I have finally gotten all of the wrinkles out, but I won’t know until I start quilting it again.

Unfortunately there are two smaller puckers that I don’t think I’m going to be able to smooth out. It would require completely undoing all of the quilting I’ve done so far rather than just a foot of quilting. They’re so small you can’t even really see them, but you can feel them when you run your hand over the back of the quilt. I have to decide what to do. If this wasn’t a gift I wouldn’t even worry about it, but because I’m making it for someone else I want it to be as perfect as possible. Plus, no one wants to feel a weird bump when they’re snuggling up in their blanket.

I’m sure my son had something to do with the issues I’m having. He wouldn’t stay off of the quilt as I tried to layer everything together. I swear they were completely smooth before he got on them, but you can clearly see some gathered material around his feet that I didn’t notice before this became an issue. If he wasn’t so adorable I’d be extremely irritated with him. 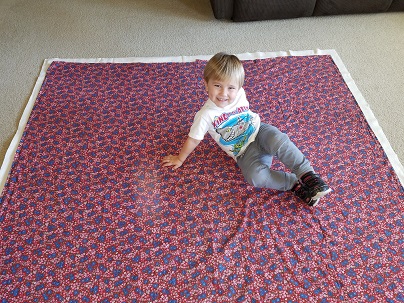 At this point I’m leaning towards picking everything out. As I’ve been typing this I realized that I could continue, but if I continue to quilt and have more puckering issues I’m going to end up unpicking it all anyway, and I’d have way more to pick out than I do now. I think it’s better just to undo everything and completely re-do the basting on the back. I’m not committing to anything yet, though. I’ll see how I feel next week when I have to make a definitive decision.