I Need Help With Curves

Okay, so this week I wanted to do step four first, which is to applique the poppies onto the 6″ squares I cut, just so I wouldn’t lose the small pieces that make up the flowers. Also, I’m nervous about them so I kind of wanted to get them over with.

Slipping is a big concern of mine. No matter how hard you try to keep two pieces of fabric together they always manage to shift. I know you can pin it, but then you have to deal with potential holes in your material, not to mention the time it takes to get them pinned properly.

Thankfully, this weekend I received a visit from my Aunt and Uncle by marriage who own Sew Very Smooth, Steve and LuAnn Tippets. I think I forgot to mention I was their niece when I first introduced myself. Shame on me. Anyway, they left me with some materials and a lot of advice. One bit of advice is very helpful in this exact situation which is to use elmer’s glue to baste the material together. It’s starch based and water soluble so it will come out when it gets washed. Fantastic. 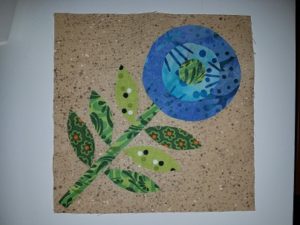 Knowing that it would be extremely helpful to have these pieces stay put, I took the time to glue my poppies together so all I’d have to do is sew around the edge with a fun applique stitch.

I was so excited to start sewing, but then I realized I’d never done applique with a sewing machine before and I didn’t want to make a mess of these flowers.

I decided it would be best to practice a blanket stitch on just a scrap of material. I’ve done it by hand before, but I’ve never tried it on a machine. The stitch itself was easy, but once I tried to turn it went horribly wrong. There was bunching and gathered thread on the back, not to mention there wasn’t much of a turn happening.

Here is a small sampling of my attempts. 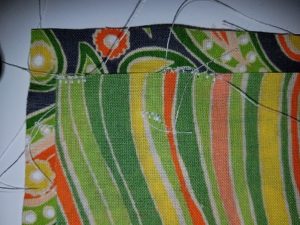 It looks awful. You can’t see all the stitching that is under the striped material. I had more, but then decided I needed to try and sew two pieces together and ended up covering most of it up. Oops.

So how do I master a curved stitch? I watched a video where it was suggested to practice tracing a curved line on paper on the machine but with a non-threaded needle. The problem with that is the needle gets dull from the paper so you have to throw it away once you’re done practicing. That doesn’t seem very ideal. I am considering drawing some curved lines on a scrap of material and trying to follow that. I just need to figure out the best way to turn material.

The feed dogs make it difficult to turn, but I’m not sure I’m ready to attempt to sew with them down. I just know my stitches would end up in multiple different widths if I did that. Do the feed dogs have to be down in order to do a curve or can they stay up? Also, I’ve heard of quilting gloves. Are they really useful in situations like this or do they just create more problems?

For now I’m going to have to put the applique on pause and go back to the first step, half square triangles. I know how to do those. I think after dealing with this struggle it will do me some good to do something I have confidence in. I’m hoping to gain some insights before I attempt the applique stitching again. I probably have a few weeks, but I’ll eventually need to tackle them.