This week I was able to spend some time paper piecing again. It really is my favorite quilting technique. It was extra fun because my Mom has been here visiting me and she has never done paper piecing; she has always found it to be really confusing. It was nice to be able to show her exactly how to do it so maybe now she’ll be willing to give it a try on her own.

I also had the chance to show her all of the blocks I’ve completed for the BOM quilt I’m making and I am now so excited to finally get to put the blocks all together in a few months! Seeing them all made me realize just how much I’ve learned and how Thiawesome this quilt will look once it’s completely finished.

The main block for this month is unfinished, but it’s so close to being done. The only thing I have left to do is press open the third corner and then sew on the fourth corner. I will have to tear out the paper as well, but that is fairly easy to do because I use a smaller stitch when I’m paper piecing and the paper falls right out because it creates a kind of perforation.

This week I also made a smaller block. This is the fourth and final one of this design. I will admit I’m relieved it’s the last one. It is probably my least favorite to assemble of all the blocks. I can’t even really explain why, It just doesn’t come together as smoothly as the other ones do. It’s very pretty when it’s finished, though, so there’s that.

The final thing I did this week was make a kunai holder for my son’s Halloween costume. Last week I made his headband, but the look wouldn’t have been complete without access to his special ninja weapons. This will wrap around his leg…if he’ll let me put it on him. It’s always a gamble when you’re dressing a two year old. 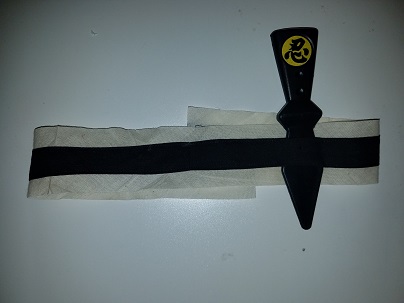 I am so excited for Halloween, mainly because it means we’ll be that much closer to Christmas!

Next week I plan on starting on a new project, a Christmas gift for my mother-in-law. I’m really excited about it but I’m still working out the details so you’ll have to wait until next week to know exactly what I’m planning to do. She is very busy and doesn’t have time to read these posts and I’m hoping it stays that way as long as I’m working on this gift. I’d hate for the surprise to be ruined for her because I think she’s really going to like it when it’s done.

Does anyone else have any special Christmas project planned this year?