My Spring Quilt Has Begun 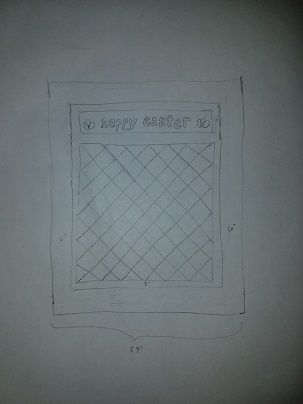 This was a whirlwind week for me. I had planned on spending the week practicing my free motion quilting, but I couldn’t get the Easter blanket I’ve been wanting to make out of my head. I HAD to get started on it.

I spent some time sketching out what I have envisioned. It’s a rough sketch, but it’s all I really need unless I plan on writing out instructions for someone else to follow. I don’t think that will be happening any time soon though. As I’ve been working on it, I actually changed my mind about the saying that will be appliqued on the top of the quilt. Originally I wanted to highlight the Easter elements of the charm pack I was using, but I’ve decided to focus more on the Spring aspect. SO, rather than “Happy Easter,” the saying will be “Hello Spring.”

I have to give a shout out to The Missouri Star Co. and their BLOCK magazine, summer vol. 5 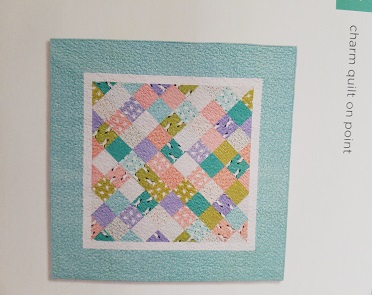 issue 3, which inspired this quilt. I utilized the center of the Charm Quilt On Point pattern found on page 74.

This was the first time I’ve worked with charm packs. I spent so much time trying to plan the layout of these charms but then I finally gave up once I realized that no matter how much I plan, it won’t turn out exactly how I want. This is because I had to make a rectangle first that was made up of twelve rows of six charms each. I would then be cutting this into three pieces and reattaching two of the pieces to the larger third piece, which would rearrange the order that I had so painstakingly planned.

Ultimately, I just laid all of the charms out on the ground and then stacked them as randomly as I could and sewed them all together in whichever order they ended up in. I was so nervous that it would look weird, but thankfully it worked out perfectly with the spacing of darker and lighter charms. 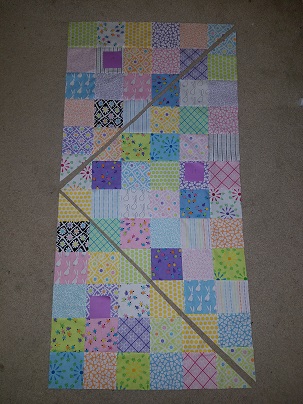 I didn’t think I’d get to the cutting part this week but I did. I was SOOOO terrified to cut this. I read the instructions at least four times just to make sure I didn’t screw it up. It really helped that my points were so perfect so I was able to cut right down the center like I was supposed to. Thank you Ideal Seam Guide.

When I was doing the rearranging I momentarily got worried that I would lose my seam allowance so the rows wouldn’t like up properly, but I had forgotten I was putting the two outside edges that weren’t cut together so they still had the same measurements. 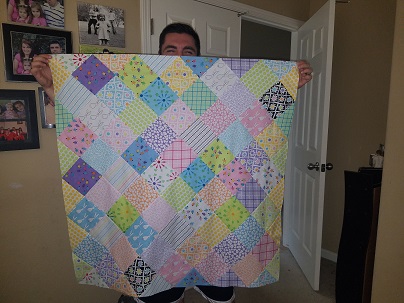 wasn’t laid out on the floor.

The next step was getting the fabric for the rest of the quilt. I was so excited to finally find a quilt shop near my house that sells amazing quilting fabrics. I went in with a yellow and blue color scheme planned, but I walked out of the shop with pink and green fabrics. The yellow just didn’t work and I didn’t realize how hard blue would be to match. Thankfully, the green is the absolutely perfect shade and I love the pattern with the pink. The two together kind of create a watermelon effect which definitely reminds me of spring. The two ladies who work there were so helpful and let me drape my small charm quilt over so many bolts of fabric to find the right ones for this project. I’m excited to continue to utilize that shop for future projects and maybe take a class or two. 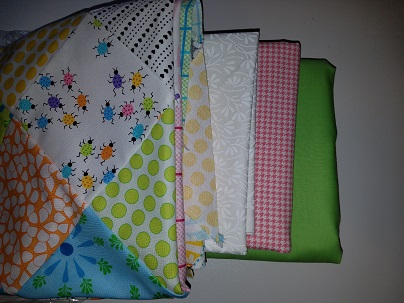 Next week I will be working on the lettering for the “Hello Spring.” I have to create my own templates which won’t be easy, but I know I can do it. If anyone has any advice on making templates I would love to hear it. Hopefully I will also be able to get some freemotion practice as well. I have my basted sandwiches all ready to go, I just need to find the time to use them. 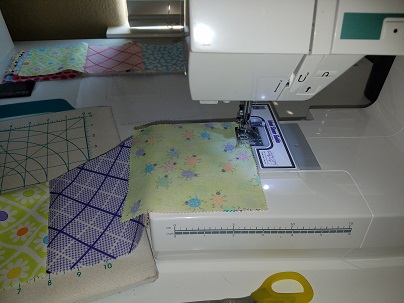 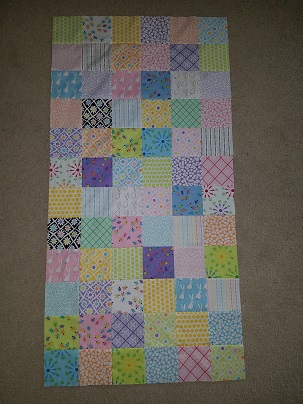 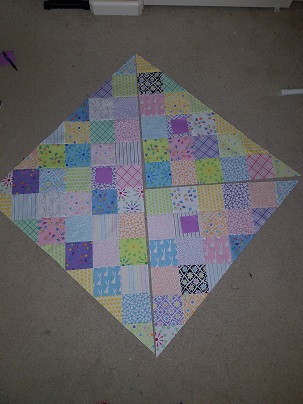