My weighted blanket project has begun. It was a little overwhelming going to the store to pick out material to use. There are so many different combinations of textures, patterns, and colors that it’s hard to whittle it down. Does anyone have any advice on how they plan their fabric choices? Do you go to the store with just the color scheme in mind or do you have patterns and shapes planned as well?

To give me a starting point, I decided to focus on texture and color. My daughter is sensitive to textures and because this is supposed to help with her anxiety I thought it best to have material that will be comforting to her. The top choice for that purpose was flannel. From there I just had to decide on what prints I wanted.

I was going to find a cat print since she LOVES cats, but I thought she might grow out of that obsession before she is done needing the blanket, so I went with a pink plaid instead.

I wanted the blanket to have a distinct front and back so I picked a contrasting pattern for the back, white with grey dots. I wouldn’t normally have thought to put plaids and polka dots together but when I walked down the flannel section holding the pink plaid up to each option my heart just felt happy when it was next to the polka dots. I didn’t feel I had a choice after that. Has that happened to anyone else or is it just me?

My goal was to have this blanket be the same size as my favorite throw blanket which is 61″ x 48.” I had two and a half yards of each fabric and a yard is only 40.5″ wide. I had to cut twenty two inches off the end and divide that into two equal pieces then sew those together on the short end. I then sewed the smaller strip to the long side of the wider piece.

The blanket looks longer on one side, but it’s just the way the picture was taken. The blanket is the same length on both ends. 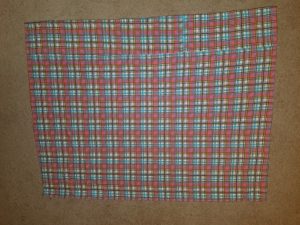 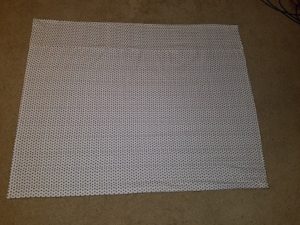 I tried to line up the seam so that there wouldn’t be a break in the plaid pattern, but I wasn’t able to. Unfortunately there wasn’t enough fabric to line it up and still create the size blanket I wanted. It would have been about eight inches short which is too much. If it had only been an inch or two I would have done it. I’m hoping that once I add the pink stitching for each pouch that holds the weighted beads you won’t notice the seam as much.

I’ve been sick this week with a head cold so it’s hard to hear and I have a lot of pressure in my head so it’s uncomfortable to look down. I would have loved to have gotten farther along on this project than I did, but with the congestion I wasn’t able to do more than sew the two sides together on three ends, leaving the fourth side open to add the beads.

I had to get a picture of one of the corners. I’m pretty proud of how this looks.

I went to the doctor and was given some antibiotics and decongestants. I should be feeling much better in a few days so hopefully I’ll be able to get this blanket finished in time for Christmas. 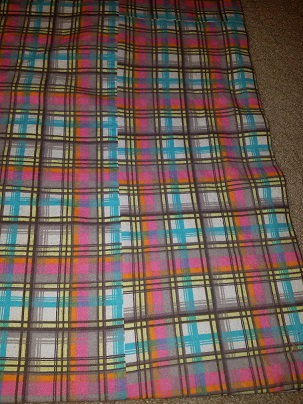 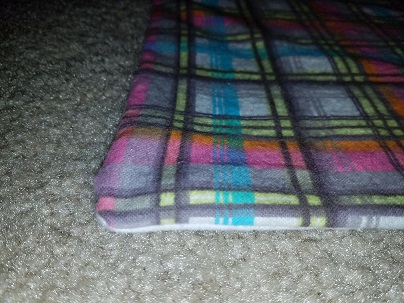