It’s Not As Easy As It Looks

The thing about a new sewing machine is you can’t just take it out of the box and start sewing. It needs to be prepped first.
It took me a half an hour to figure out how to wind a bobbin and thread my machine, and that was even with a step by step video to guide me. I kept having to pause and backtrack to make sure I hadn’t missed a step. 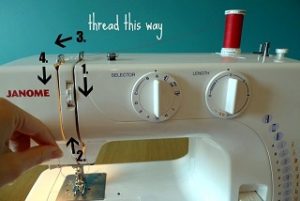 Thankfully, I was able to successfully set up my Juki so I could finally start sewing. Sort of.

Naturally my first stitch was a straight stitch. I had purchased a few random scraps of fabric just to practice on. I know they’re not the best quality material, which I’ll dive into later and hopefully get a bunch of input and advice on, but for this purpose it works great. I literally just sat and stitched two pieces of fabric together. Turns out, it was really helpful to do that. I was able to play with stitching speed a bit. The slowest setting was my best friend the first couple of passes but I quickly became comfortable enough to speed it up a bit. I was able to practice changing direction and figure out the reverse stitch. I’m slightly embarrassed to say it took five failed attempts before I realized I had to hold the reverse button down in order for it to work. 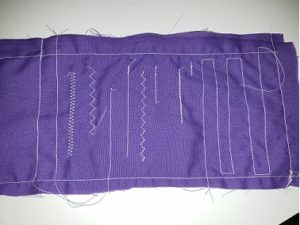 I was also able to experiment with some of the decorative stitches. My machine can do twenty different ones, but I stuck with the first ten for now. Mainly because the other stitches require a foot change and I’m not ready to tackle that just yet.

The decorative stitches were definitely my favorite ones to do. I’m hoping to make use of all of them during my future projects.

As you can see from the picture my lines aren’t straight yet. Not even close. Part of the problem was the fabric not laying flat, but mostly I just need to pull out my Ideal Seam Guide that arrived in the mail just a few days ago. I’m excited to see how I do with the guide to help me.