It Looks Even Better Than I Remembered

Last week I set a goal to finish the blocks from my black and red quilt and have them assembled. I’m happy to report that I did it!! Granted, I still need to put the border around the edges, but I knew I would never be able to get the border on the quilt 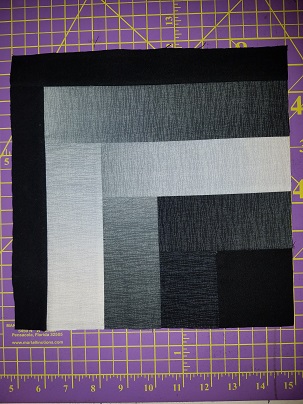 along with everything else I had planned this week. That’s okay though, it gives me something to work on next week. It’s actually perfect because I’ll be receiving the next block kit for my BOM near the end of the week so I’ll have that to work on the following week.

My first hurdle was tackling the last edge to the black and grey blocks. I was so relieved to see that the black made the rest of the block pop. I’ve been stressing about what I was going to do to add the extra inch around the border for so long. I feel so much better now that it’s done and I can see that it actually works.

I then had to square up my huge stack of blocks. 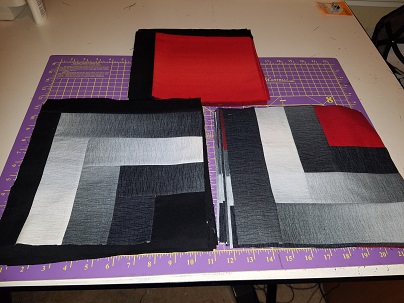 They were all pretty close to perfect and didn’t need much trimmed off, and more importantly, none of them were too small! I know a HUGE part of that was because my seams were exactly 1/4 of an inch so they came out just right. Thank you Ideal Seam Guide.

I wish this picture did a better job of showing how thick those stacks are. There are only 13 of the solid red blocks but there are 26 of the small black square and 25 of the blocks with the small red square. It was actually very satisfying to have them all stacked in one big pile, but I thought it would be better to show each style of block. 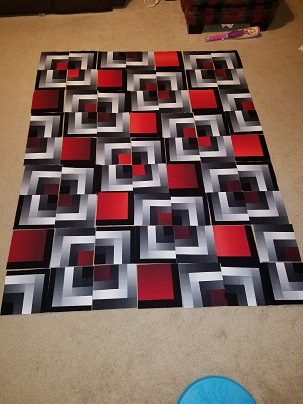 Then came one of the funnest parts of this whole process for me. I laid out each of the blocks in the order that I wanted them to be. I had to shuffle blocks around to make sure the colored blocks were perfectly placed. This was a very important step because there are so many different tones to the red blocks. It took a good twenty minutes to settle on this, but I was pretty happy with it.

I’m not sure this was the most effective way to do this, but it worked for me. How does everyone else keep their blocks organized for such a large project? Am I moving in the right direction with my process or is there something that I can improve and do better next time? 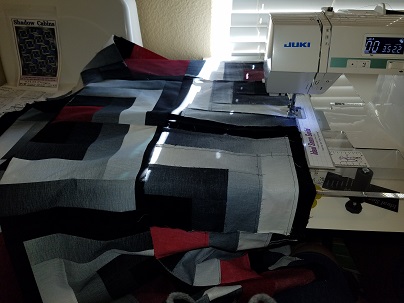 For the actually sewing my extension table was perfect. I’ll admit I haven’t used it in awhile but that’s just because there isn’t enough room on my desk for the table and my pressing board so I can’t sit and do everything in one place. It forces me to get up and press and then sit back down. When I’m working on just the blocks it’s so much easier to just sit and do it. However, now that I was working with multiple blocks I knew I’d want each row to be able to lay out flat so I wouldn’t have to fight gravity while trying to keep things lined up with my guide. It was so much easier with the table.  Plus, it was easier to press such a large seam using the ironing board rather than my tiny pressing board. 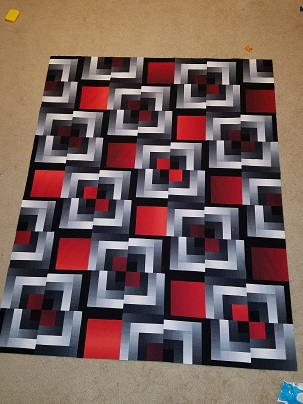 I am so thrilled with how this quilt is turning out. The kit I have has a picture of the finished quilt but instead of red it’s blue. My husband hadn’t seen the quilt done in red and as much as I like the blue quilt, it doesn’t do the red justice. I was so excited to finally show my husband the ‘finished’ quilt in red so he could finally understand why I HAD to buy it when I saw it.

He gets it now.

It really is stunning to me. These are our wedding colors so you can definitely say I have a thing for black and red together. I can’t wait until the border is on it so I can start thinking about quilting it. I have no idea how I’m going to accomplish it but I know I want to try.

Has anyone ever successfully quilted a blanket without a long arm sewing machine? I’m thinking I might need to invest in a long armed machine, but I’m not sure it’s in the budget. Is it absolutely necessary or are there tricks to quilting with a smaller machine? I’d just send it out to be quilted but I’m really wanting to see this project through to the finish.