It Is So Close To Perfect

This week has been the craziest and longest week that I have had in a long time. Three out of my four kids started school, one of which started middle school, so we’ve had to adjust to a new routine. The hardest part is the fact that my kids attend a school outside of our district because our assigned school was full and not accepting anymore students. They don’t have a bus for out of district kids so I get to drive my kids to school and pick them up at the end of the day. It eats up a lot of time because it’s an hour to an hour and fifteen minutes round trip depending on traffic. Fun right?

Thankfully, my two year old is a good sport and enjoys long car rides. Unfortunately, it makes it harder to get as much sewing done as I would like. I’m hoping that as we settle into a routine my son will let me sew more while the kids are at school.

Despite all of that craziness, I did manage to get further along on my spring quilt than I had anticipated. 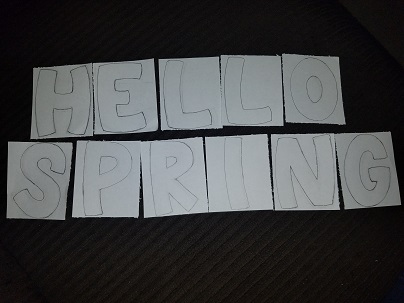 I needed to make templates for the lettering but I struggled finding a font I liked that would print at the right size. I decided to free hand each template instead, using an existing font as a guide.

Much erasing and ‘fixing’ was done, but I am happy with how they ultimately turned out. My husband thought the letter N might be a little too wide, but I think it works because it is a wide letter and it’s almost as wide as the H.

I cut them out and then used those templates on the foundation I like to use for applique.

Covering the foundation with the different fabric choices was not an easy task because of the taught curves and corners. I had to utilize some liquid stitch to anchor those tight spots so hopefully there won’t be any fraying once this quilt has been washed. I forgot to take a picture of the back of the letters, but I think that my subconscious knew that they were not pretty and no one should see how bad they looked from the back.

I finished all of the letters but when I laid them out I found a glaring problem. Do you see it?

They all look great except for the letter I. I hate how the polka dots line up down the length of the letter. It wouldn’t be so bad if they all looked uniform like that, but the rest have nice ‘sporadic’ polka dots. I had to redo it and I’m glad I did. Thankfully it was the easiest letter to do all over again. 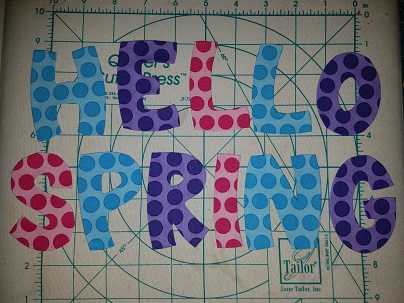 The last thing I was able to accomplish this week was glue basting each letter, and a fun flower, onto the green sashing that will go at the top of the quilt. I haven’t actually stitched them on yet, there hasn’t been enough time, but I will work on that next week. 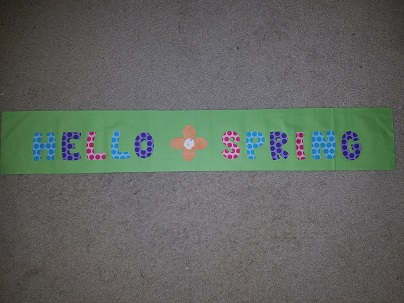 I will admit I was in a bit of a hurry when I did this. I had them all laid out and was just making micro adjustments before I actually glued them down when my alarm went off letting me know I had fifteen minutes until I had to leave to pick my kids up from school. I should have just left it the way that it is and hoped that the cats left it alone, but I didn’t want to ‘start over’ with the placement of each letter. I decided to go ahead and glue baste them where they were.

While I don’t hate their placement, I don’t absolutely love it either. The flower is perfectly center, but the words are slightly lower than the flower, the word SPRING more so than the word HELLO. The letter G bothers me the most. I tried to fix it. Usually with glue basting, even when it’s heat set, you can still pull each element off and reglue it. Any remnants of glue will disappear with the wash. Unfortunately, this time the glue stuck to the foundation and when I tried to take the G off it started to rip the foundation, which I don’t want. I have to leave it the way that it is. I’m sure it won’t bother anyone else like it does me, but I just wanted this quilt to be as perfect as it can be. I guess the beauty is in the flaws, right?

How do you handle errors like this? Are there any tips to not letting mistakes take over the joy of working on or finishing a project? Is that saying really true, beauty is in the flaws? Do you prefer picture perfect quilts or ones with small flaws? I don’t think I’ve seen enough finished quilts to know how I feel about it, but I’m hoping it doesn’t continue to bother me as I finish this fun quilt.