The end of the month means I have received my new BOM block.

I was so excited to start this new block. It is an entirely applique’d block which is a little intimidating, but with the turned edge technique I learned a couple of months ago combined with the glue basting technique I know it hasn’t been bad at all.

This is the block 90% completed. I still need to do the actual stitching around each ‘orange peel’ but I can’t do that until next week. I’m waiting on the right thread to come in the mail. I hate waiting. I have experience doing an applique stitch with curves though, so I’m not too worried about it. These pieces have all been glued on to the back of the block so they’re not going anywhere until they’re sewed on next week.

I just love these colors. It’s probably my favorite block so far. I had to measure and mark out where each piece was supposed to go, but they all fit together perfectly so I know I measured correctly. Honestly, that was probably the hardest part of this block. Not too shabby.

I didn’t get to use my Ideal Seam guide for the applique block at all, but I did get to use it for the second smaller block. I will be using the seam guide for a third block that I’ll be making next week as well. 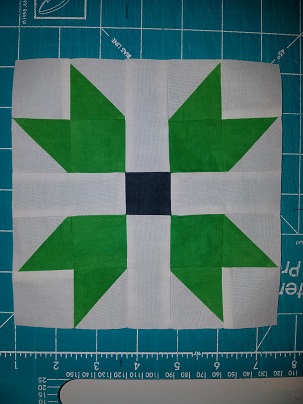 I’ve already made this block twice before, but this time it’s in green.

It’s been a pretty simple week. I’ve had to deal with sick kids so I didn’t get as much done as I had hoped, but I’m grateful I was able to get these done.

I’m looking forward to figuring out what my next project will be while I figure out the back and batting for my red and black quilt. I need to keep working on the heart stockings for Valentine’s Day, but I’d also like to start on something using the Easter material I have. I’m thinking a throw blanket…or maybe a centerpiece…or maybe both. You’ll have to wait until next week to see what I decide to do.