I Hit A Snag

This week I started putting together the first set of blocks for my red and black quilt. I was so excited to finally start on this project. I’ve been looking forward to it for months. So imagine my disappointment when I realized that I had a major problem.

I pre-washed all of the fabrics for this quilt because it uses red material and I didn’t want it to bleed. I’m glad I did it. I would have felt horrible if the red had bled onto the rest of the quilt. However, I wasn’t counting on the amount of shrinkage that happened.

The black ombre fabric was supposed to be between 42″ and 44″ wide. This would allow for each 2 1/2″ strip that I cut to be that long. Unfortunately, it shrunk down to just over 41″. I was hoping it wouldn’t be an issue, but I was wrong.

Each strip is sewn to an edge of the red square. You then cut off the excess and sew it on to the other side and repeat. When I got to the last side I didn’t have enough material by about an inch. Ugh. 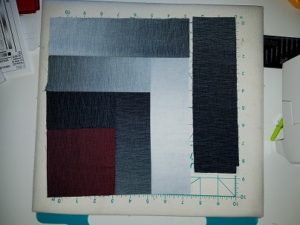 As far as I could tell I only had two options. The first was to cut out additional 10″ strips from the leftover material and use those. It wouldn’t be a perfect continuation of the fade, but it would work.

The second option was to just cut out enough material for the section missing and sew it on as a sort of patch. It wouldn’t look as nice, but it would allow the quilt to be finished. 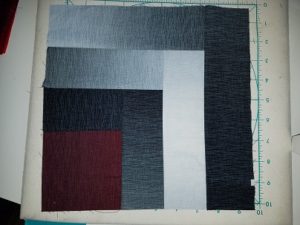 It’s not perfect and I’m sure it will bother me, but it was my only option. Some of the blocks have lighter patches at the bottom and so they are definitely more noticeable, but I’m hoping that once it’s all put together and quilted you won’t notice it. Thankfully the pattern of this quilt is a little forgiving. This solution definitely wouldn’t work with every pattern out there.

Which leads me to my next question. What do you do if you end up short on the length of material you need? Do you avoid pre-washing so this type of thing won’t happen or do you pre-wash exclusively so that if you have shrinkage you can deal with it now instead of with a warped finished product? Moving forward I’m not sure how to proceed with future projects.

Hopefully I’ll figure it out before the next project, but for now I’m focusing on this one. I have completed 15 of the 25 necessary blocks.

Other than the snag with the length, I am loving how these blocks are turning out.

Once I finish the final 10 of this style I will start on the next set of 25 which are similar but instead of a red block it will be a black block that is an inch smaller. I’m grateful I won’t have to deal with the shortage issue with those blocks.

This week I also received my first quilting magazine! I’ve waited a few months for this to arrive and I’m so excited it’s finally here.

It is a bi-monthly magazine and I just missed the cut off for the February edition so I’ve had to wait for the April one to be released.

I’ve already spent a bunch of time looking through it and getting excited about the potential projects ahead. 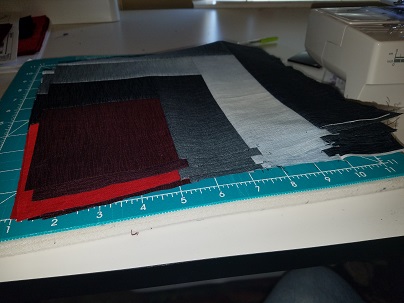 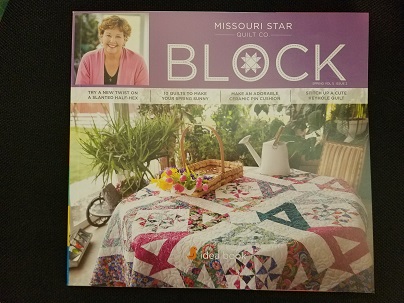